More Than Just a VA: One Family’s Journey Through the California Foster Care System

Editor’s Note: For this episode of “More Than Just a VA,” our Chief People Officer Becca Vaclavik interviewed Kimberly Voorhis about her experiences as a foster parent. You can read more about Kimberly’s life as a virtual assistant and work-at-home mom here and here.

If you had checked in with Kimberly Voorhis four years ago, you might have met a spirited, friendly newlywed commuting hours a day to her office job. She was out the door at 5:30 am to beat SoCal rush hour traffic, she worked seven to five, and didn’t make it home until 6:30 or 7:00 pm each night. Fourteen hour days were the norm, no matter how much work was (or wasn’t) on her plate, “No matter what, I would have to sit at my desk until 5 o’clock. Even if I was done at 2 o’clock.”

Two years ago? She was deep in the weeds of the California foster care system, working as a freelance virtual assistant from courthouse waiting rooms, social worker appointments, and parental visits inside any agreed-upon place with wifi.

Today, she and her husband Mark are the forever parents to three beautiful kids ages 7, 6, and almost 3 (and, as of this article’s publishing, have opened their home and hearts at one time or another to 6 other babies in the foster system). So much has changed, but she’s still pretty spirited and friendly.

Kimberly is more than just a VA. She’s also a mom, a foster caretaker, and a temporary source of love and respite for some of California’s youngest weary souls.

When Kimberly and Mark first felt called to become foster parents, she was warned about working a traditional 9-to-5 schedule. “When we first started, we had been told it was possible — it would be hard but it would be possible — to foster and work.” But, as any of our readers on the west coast know, trying to pay a mortgage on a single income in Southern California is almost impossible. Both Kimberly and Mark tried to make it work.

Their first placement was a newborn baby boy. Kimberly used her paid maternity leave to care for him.

And then she hit a roadblock when they received their second placement: a 3-month old little boy.

“I didn’t have any leave left. Even if I were to have a biological child, I didn’t have any time left, or it was unpaid… When we got [my son], I had to go back to work the next day and place him in an in-home daycare.”

She was working long hours with a difficult commute, and she didn’t have any resources at her job she could utilize to care for her new baby. She had used up every scrap of leave already.

Several months later, when she got the call that her little boy had two older sisters who also needed a home, Kimberly had two thoughts. First: in a short window, she and Mark moved from having no children to having three. Second: her job wasn’t going to be able to support the huge life-changing event she was in the throes of.

So, she decorated the spare bedroom with two twin beds—and she quit her job.

“The Tradeoff Is Forever.”

Around the same time, a friend introduced her to Don’t Panic. Kimberly didn’t know jobs like this even existed. She thought contractor work was for people with design degrees or highly-specialized skills.

The next few years are a blur of client meetings and social worker meetings, calendar management for her job and calendar management for her kids. She won’t say that working from home as a virtual assistant made fostering easy. Sometimes, on her busiest days, she was up around 4 in the morning, just so she could squeeze in a cup of coffee by herself before she kicked off her crazy schedule.

But the flexibility and the ability to be with her kids, plus being able to contribute to her household, has been invaluable. As she puts it, “I can do anything that’s temporary, knowing there’s a light at the end of the tunnel. The tradeoff is ‘forever’… Whether your foster experience lasts one year or ten years and you see hundreds of kids, it’s worth it.” 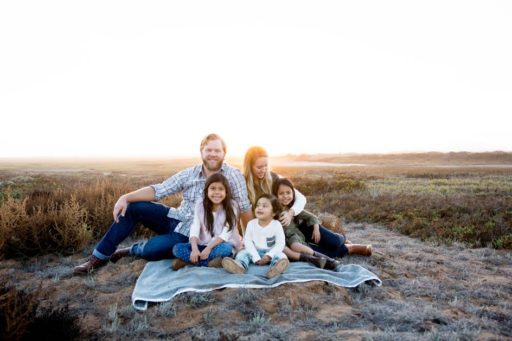 On December 19, 2016, after over two years of fostering, Kimberly and Mark were finally able to adopt their kids. While they still occasionally open their home and their hearts to little ones in need, life is generally a lot calmer.

Like most moms who work at home, she gets most of her work done while her kids are at school. In the afternoons, she closes her laptop and takes them to the beach, or to Starbucks for a quick treat, or they make dinner together as a family. When we spoke on the phone for this interview, she was checking in with me from a short vacation before another school year kicks off.

The relief in her voice is palpable when she talks about this new chapter in their lives. “I feel like I’m living in a different world.”

Kimberly’s biggest piece of advice for people looking to move from a more traditional work life to something virtual is to find your tribe. Working with an agency was incredibly helpful when she was in the trenches of her foster journey. Unexpected calls from social workers or parental visitations that ran late meant having a support system and flexibility in her work was essential. She found that at Don’t Panic. “I had people to lean on if there was an emergency.”

She encourages anyone feeling called to undergo a huge change like becoming a foster parent to do their research and explore how they might want their career to adapt as well. Most people don’t realize that it’s possible to finish your work day by noon and spend the afternoon building sand castles with your kids. But those jobs exist out there if you know where to find them!

At Don’t Panic, we’re more than just VAs. We’re artists and missionaries and moms and more. Are you interested in learning more about how to become a virtual assistant? Contact us here for more information about joining our bad ass team of VAs.

Get tasks off your plate faster with the VA Starter Kit!

Thank you! Check your inbox for your downloadable: Panic Proof Guide to the Perfect Virtual Assistant Relationship

Something went wrong. Please check your entries and try again.

Focus on your best. We'll handle the rest.

Match Me With the Right VA

How to Promote Emotional Wellbeing on Your Team

Remote Employee or VA: Which Hire is Right For You?